We have officially transitioned into the Autumn Market, leaving both the Spring and Summer Markets in the rearview mirror.

The Autumn Market: the Orange County housing market just downshifted into a lower gear, part of a normal housing cycle.

The initial school bell just rang and families are getting back into their daily ritual of making lunches, participating in carpools, and getting up at the crack of dawn. That initial bell also indicated the start of housing’s Autumn Market. Buyers and sellers can expect a lot of changes. The key to success is having the right expectations.

First, expect the active listing inventory to drop from today’s level as fewer and fewer homeowners place their homes on the market. Combine that with the fact that many unsuccessful sellers will throw in the towel and pull their homes off of the market. Over the past five years, on average the active listing inventory has dropped by 12% from the end of August through mid-November when we transition into the Holiday Market. A 12% drop would mean that today’s 7,178 mark would decline to 6,308.

Along with the drop in the inventory, expect a significant drop in demand as well. It’s just not the best time of the year to make a move. Families generally want to make a move during the summer months. When you take into consideration that homes can take a couple of months to close, it’s no wonder that so many homes are placed under contract in the spring and close in the summer. It is much easier for kids to transition into a new school with a summer move. Moving in the middle of the school year is a lot more challenging. Over the past five years (from August through mid-November), on average demand has dropped by 10%. That represents a drop from 2,722 pending sales to 2,460.

Taking into consideration he drop in both the inventory and demand, the expected market time for newly listed homes in Orange County is expected to change very little from its current 2.64 month mark, or 79 days. That means that the overall feel of the housing market is not going to change much from where it stands today. It will remain HOT in the lower ranges, below $500,000, a seller’s market. For homes priced between $500,000 and $1,000,000, it will be a slight seller’s market towards the bottom of that range, but will be very close to a balanced market towards the top of the range. A balanced market does not favor buyers or sellers. For homes priced above $1,000,000, it will be a slow go. The expected market time is currently at 8.5 months and will not change much over the course of the Autumn Market.

The best approach for sellers is to know the current landscape of the local housing market. It’s also a given, the higher the price, the longer the home is going to take to sell. Homes are no longer flying off the market like they did months ago. There are fewer buyers looking to buy, so there will be fewer showings. There may be fewer sellers to compete with, but that will be offset by softer demand.

For sellers, it boils down to price and condition, the two factors that they have control over. For the rest of the year, many overzealous sellers will learn the hard way that they will not find success without carefully honing in on price, bringing the price as close to their Fair Market Value as possible. With less buyer competition, buyers really do not want to pay much more than the last comparable sale. Multiple offers will no longer be the norm, so buyers will not be tripping over each other to purchase a home like they did in May. Since many new sellers will hit the market overpriced, ignoring basic market fundamentals and the slower autumn season, they will sit on the market with very few showings and no offers.

The best approach for buyers is to understand that while there are fewer buyers competing to purchase, it is NOT a buyer’s market. On the contrary, for all of Orange County, it is still a slight seller’s market and will remain that way for the remainder of the year. Buyers cannot afford to be too uncompromising in their quest to find a deal. During this time of the year many buyers mistakenly feel that because it is no longer the spring or summer that it is the best time to buy, the best time to “get a deal.” Buyers that make it their mission, like so many do every year, will not be able to achieve their goal in isolating a home. The housing market is far too healthy for sellers to make exceptions and start discounting the price just because housing is not as hot as earlier in the year.

Instead, buyers really need to stick to the sound strategy of isolating the home that best fits their needs and then offering to pay close to the home’s Fair Market Value. Remember, there will still be plenty of overpriced, overly optimistic sellers looking to get a lot more than the last closed sale. They too will not find success until they lower the price and succumb to being a bit more realistic. Until then, ignore these homes and continue the search.

Active Inventory: It looks as if the active inventory has reached a peak for the year.

In the past two weeks, the active inventory has grown by only 11 homes and now sits at 7,178. Now that school has started, this level is most likely the peak for the inventory in 2015. We can expect the inventory to slowing drop over the coming months as fewer sellers enter the fray and many sellers who have not found success will ultimately throw in the towel, pulling their homes off of the market.

Last year at this time the inventory totaled 8,084 homes, 708 more than today, with an expected market time of 3.16 months, or 95 days. That’s 16 additional days compared to today. 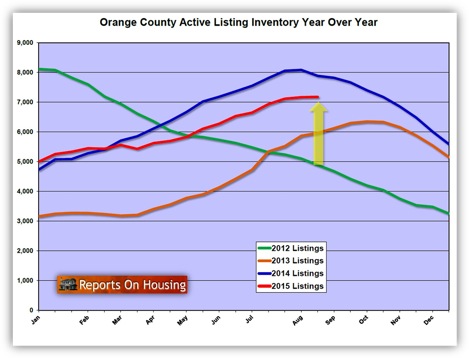 Demand: Demand decreased by 1% in the past couple of weeks.

Demand, the number of new pending sales over the prior month, decreased by 40 homes in the past two weeks and now totals 2,722 homes. Even with the increase, February levels. Demand will slowly drop for the rest of 2015.

Last year at this time there were 223 fewer pending sales, totaling 2,499. 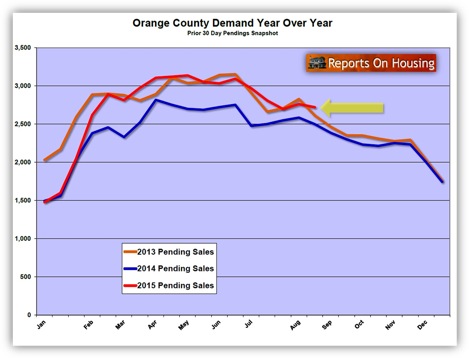 Distressed Breakdown: The distressed inventory decreased by 7 home in the past couple of weeks.

The distressed inventory, foreclosures and short sales combined, decreased by 7 homes in the past two weeks, a 3% drop, and now totals 219. Two weeks ago, the inventory grew by 24 homes, but that turned out to be more of an anomaly than a trend, as it quickly reversed course this week. Year over year, there are 21% fewer distressed homes today. 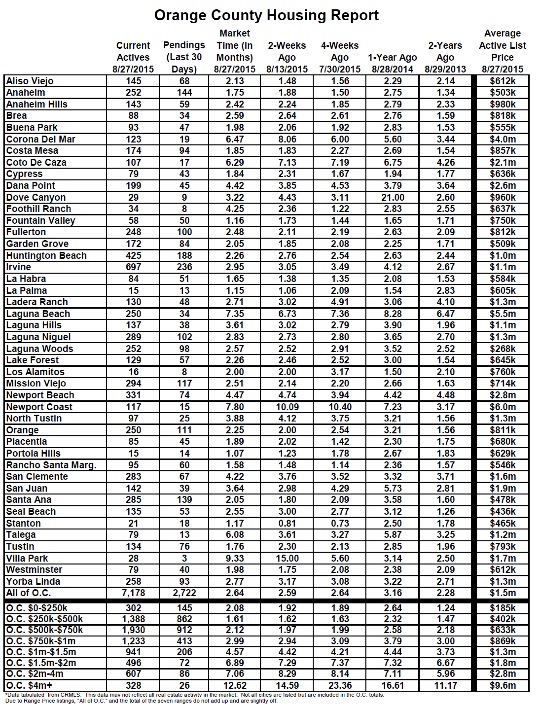 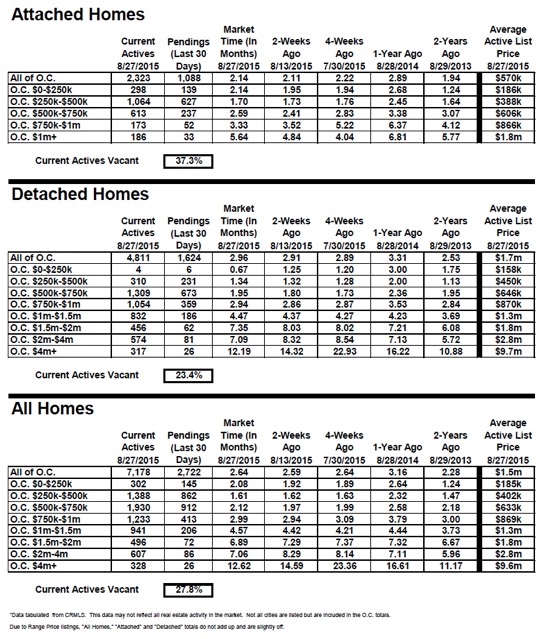 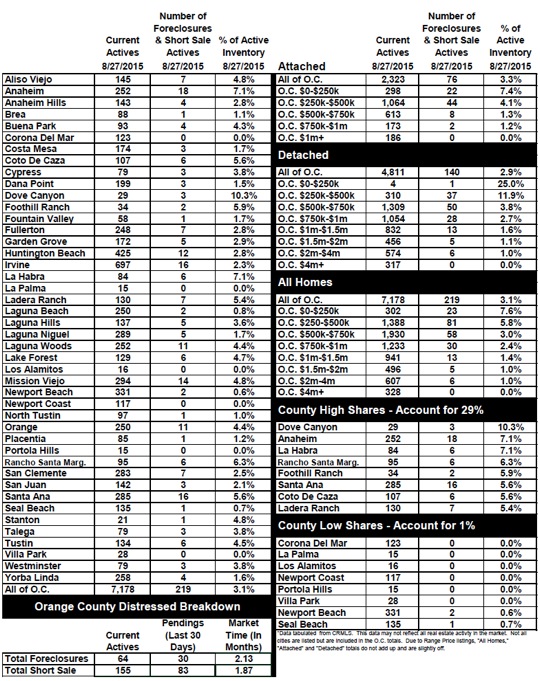