Now that half the year has passed, it is best to take a look at where we have been, where we are now, and where we are headed from here.

Housing Checkup: every once in a while it is a great idea to take a step back and evaluate the health of the current market and the latest trends.

By now everybody is acutely aware that 2015 has been an extremely hot year for housing with values rising, not enough homes on the market, and way too many competing offers. While that may describe the first half of the year, where are we headed for the second half? Is it more of the same or will the market change?

Let’s take a moment and step back from the crazy real estate scene. With a stethoscope, thermometer, and blood pressure cuff in hand, here’s the latest trends and pulse of the Orange County housing market:

The active listing inventory is climbing towards, but will remain below, the long term average. After starting the year at 5,000 homes on the market, the active inventory has climbed by 1,935 homes, a 35% rise. It is currently knocking on the door of 7,000 homes. Last year that level was surpassed in May and had been rising the entire year without pause. With stronger demand, this year has been a bit different. Nearly the same number of homes have come on the market, but more have come off the market and achieved success. There are 11% fewer homes on the market today compared to 2014, but 30% more compared to 2013. It will probably tap out at around 7,500 homes at the end of August, about 1,000 shy of Orange County’s long term average. From there it should start to fall as homeowners throw in the towel and we transition into the Autumn Market. The inventory is rising on the backs of overzealous, overpriced sellers who will not achieve success until they are priced right.

Homeowners with equity, “Equity Sellers,” dominate the Orange County real estate scene. For the first half of 2015, equity sellers represented 95% of all closed sales. Distressed homes dominated Orange County real estate just a few years ago. While there still may be some homeowners struggling, distressed sales have become nothing more than an asterisk in a much healthier market. Much has been made of adjustable rate resets and many other old wives’ tales that detail an increase in distressed home activity; instead, the market has become even more stable. Because of considerable appreciation, the number of underwater homes in Orange County has been reduced to 3% of all residence with a mortgage. Armed with a much healthier equity position, good ol’ fashioned homeowners have been encouraged to place their homes on the market.

Total closed sales are up. For the first half of the year there have been 15,158 closed sales, up 10.5% from last year when there were 13,717. Sales this year are only off by 350 closed sales compared to 2013. What’s changed? It’s not distressed sales. Those are down by 15%, or 332 fewer short sales and foreclosures combined. The change comes is due to a sharp increase in equity sales, which are up by an extra 1,573, or 12%, compared to last year. This healthy trend shows no signs of letting up, but will adhere to a normal Orange County housing cycle. Sales will start to drop as we move into August, and they will downshift further as the kids go back to school.

Sellers have been getting away with stretching the price. Sellers were able to get away with overpricing their homes for the first half of 2015, but that phenomenon is coming to an abrupt halt after transitioning into the Summer Market. Demand has dropped a bit with all of the distractions of summer. As a result, sellers are having a much harder time obtaining offers when they are overpriced. As the market downshifts, buyers move away from a willingness to pay any price just to obtain a home, to a strong desire to pay the Fair Market Value for a home, a value determined by the most recent pending and closed sales. Homes that are priced right and are in good condition will fly off the market. The latest trend is that sellers are not getting away with overpricing; instead, they are sitting on the market with no offers. Consequently, the inventory is rising and 10% of the active inventory is decreasing their asking price each and every week.

The luxury market is back. Home sales above $1 million are up 21% compared to last year. There have been 2,114 closed sales versus 1,747 last year. Actually, the last time luxury sales have been this good was back in 2005 when there were 2,291 closed sales. Luxury sellers should not get too excited though. While there have been 2,114 closed sales for the first half of 2015, there are 2,333 active listings priced above $1 million today. The current expected market time based on today’s demand is a staggering 7.86 months. Last year at this time the expected market time was 5.72 months, 27% less. While the luxury end may have started the year strong, it has since cooled off substantially and this trend could continue as we move into the slower months of the year for real estate.

Interest rates are flat. The Federal Reserve announced that they were considering raising the Federal Funds Rate sometime this year, but after reading the tea leaves, they have made no move thus far. Based upon international economic turmoil between the Greek crisis and China’s stock market crash, it doesn’t appear as if the Federal Reserve wants to rock the U.S. economic boat, so will most likely leave rates alone. They may make a small token move at the end of the year, more of a gesture than any significant change. So, it looks as if the government gift of unbelievably, historical low interest rate levels is here to stay for the remainder of the year.

Active Inventory: The inventory increased by 4% in the last couple of weeks. 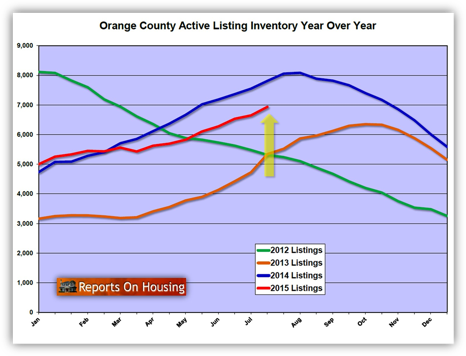 Demand: Demand decreased by 5% in the last couple of weeks.

Demand, the number of new pending sales over the prior month, decreased by 159 homes in the past two weeks and now totals 2,810 homes, its lowest level since the beginning of March. This is part of typical summer market where demand drops with all of the distractions of summer.

Last year at this time there were 309 fewer pending sales, totaling 2,501.